MESSAGES AND ELEMENTS IN THE STORY OF NARUTO Illuminati

MESSAGES AND ELEMENTS IN THE STORY OF NARUTO Illuminati
Din you know a man named Masashi Kishimoto? Perhaps many do not know him, he was a manga-ka NARUTO titled comic and animated series and was aired on TV stations around the world on ini.Saya is one of the NARUTO manga fans story this, because the effectiveness of treating pelukisnya story is quite complex and interesting ..


This artist is a genius with meyelitkan influence of religion and culture of a community in that style of thinking komiknya, was read the last manga naruto episodes ago I noticed a character named "Tobi" is very similar to the Antichrist / ANTICRIST and and some elements of the Illuminati Posted in the story.

Okay I am happy to summarize the story in detail so easy to understand!


Things you should know in Naruto: 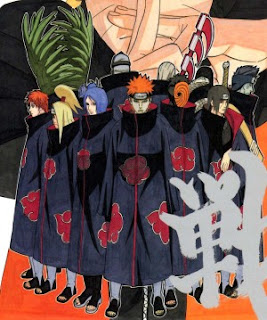 1. ORGANISASI AKATSUKI
The main antagonist ni stories, Akatsuki, which means "TWILIGHT RED 'is staffed by a number of ninja who have defected disloyal or in the interest of his own country and move in a confidential and private.

2. TOBI
Tobi or Uchiha Madara (the real name) was the founder of a clan named Uchiha and Akatsuki organization's establishment, a ninja who has lived from time immemorial in the funnies and the ni-called eternal life abadi.Dia was blind in his left eye and the mastermind in the back all the evils by manipulating the mind, lies and defamation highly unusual and the opening of the new Ninja World War.


Let me further indication of elements ....... if you think the Illuminati is just a chance, try to see the dialogue spoken by Tobi or Madara is the 'MOON EyeS PLAN':

'Let me further indication of elements ....... if you think the Illuminati is just a chance, try to see the dialogue spoken by Tobi or Madara in MOON EYES PLAN' :

"to have everything become one with me"
"I mean to achieve a complete form, in which all is united"
"I will cast my illusion upon all humans living upon the earth's surface."
"controlling all of humanity within that illusion, I will become one with the world"
"It will be a world without hatred or conflict. everything will be one with me. everything united." 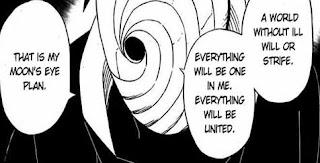 What is clear to your intended MESSAGE Madara by Masashi Kishimoto in the life of our real World? Yes, this is quite similar to the Illuminati which aims to form a New World "New World Order." MAIN ambition Akatsuki Organization is controlling the world and create a new world called peace, "One World United".
Posted by anis87 at 00:49